« Everything is simpler than one can imagine and at the same time more entangled than one can conceive. »
From Johann Wolfgang von Goethe / Sentences in Prose

The time of the culture broths is no more, or else it is buried, although still present, under layers of same, like, emojis more or less funny, gif that animate for a few seconds and come back to their point of origin to turn in loop.
The time of the NFT’s reinforces this feeling of paradox. The Hic et Nunc produced by the blockchain which certifies the uniqueness of the work by a smart contract, among other things, is immediately denied by the cloning and the multiplication of the same ones which invade the web and which, by their multiplicity and their omnipresence saturate the brain. The effects are immediate, and notably addictive. Need to appropriate the unique and multiple thing, to be part of the community, to be proud of the possession by the demonstration of the title and finally to hope that the quotation of the thing evolves, quickly or not, to draw a profit from it. The profit can be social – on the networks, the Metaverse and real life – by appropriating the influence, the aura of the « work » or series of « works ». Peter Sloterdijk evokes it perfectly, in the introduction to his essay « La competition des bonnes nouvelles ».

To be a possessor is to be part of a club, certainly. Before there was the club of those who could admire a work of art with their own eyes – before the massification of the so-called cultural tourism – there was then the competition, which still exists, of the best selfies in front of the most beautiful works of art, with always this intention to drape oneself in the aura of the work and the genius of the artist to illustrate oneself and to distinguish oneself from the members of one’s community, to valorize oneself, to give oneself value, like a commodity, or almost. 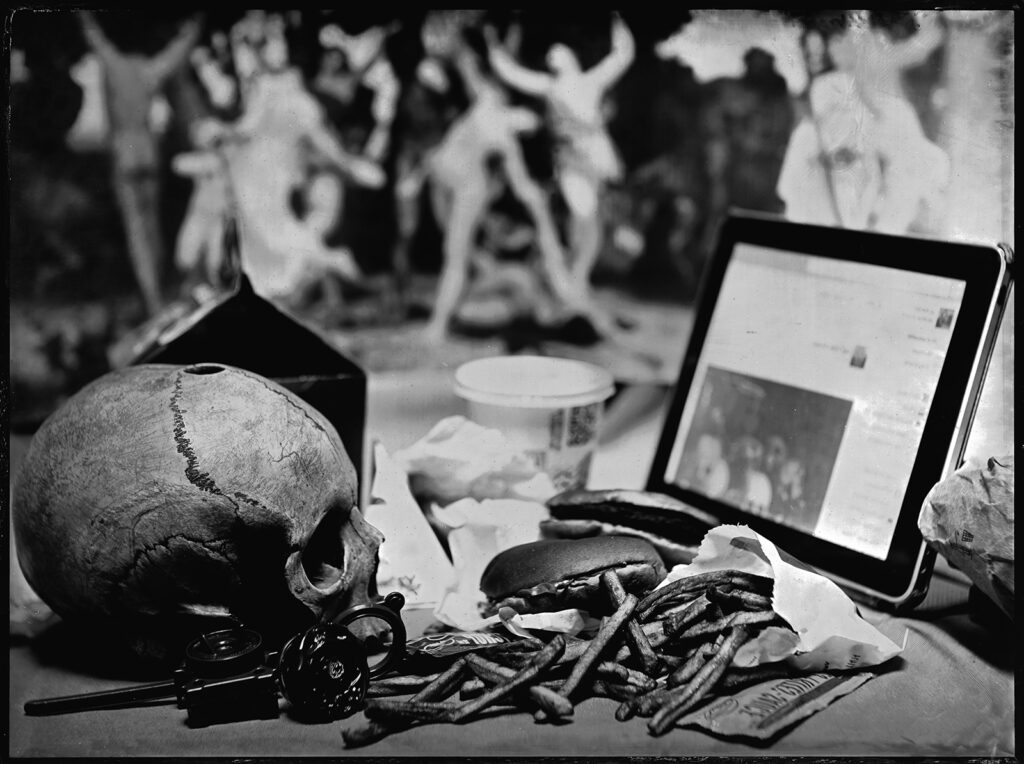 The work is no longer an object of curiosity that transports us. It becomes an element of a decoration of self-satisfaction, of self-valorization. The talent of the artist validated by the « connoisseurs » is enough, no need to pour out more, to question, to question. And this way, the broth of cultures or the broths of culture, do not quiver anymore or little or secretly. Not in closed clubs, even if the lodges are, for some, high places of culture, but in TAZs like those evoked by Hakim Bey in his eponymous essay. Timothy Leary gives some additional keys in his psychedelic essay, Chaos and Cyberculture and in Techniques of Chaos. « It has been apparent for many thousands of years that the intrinsic nature of the universe is an extreme complexity, an inexplicable disorder, a confused and mysterious splendor known as Chaos… Chaos theory makes us aware of the task before us: to understand, appreciate, and glorify the wondrous nature of the entire universe, including the delusional paradox of our brains. » A book that may have inspired Elon Musk in his incredible and extra-ordinary venture. And to return to Hakim Bey, also called Lamborn Wilson, the Art of Chaos and Pirate Utopias, offer us beautiful perspectives to extract ourselves from the thoughts formatted by the screen. It will never be said enough, the screen what hides, what hides and gives to see the reality through a constrained space.

To come back to the bubbling, there is little place for confrontation, for contradiction, however essential to the construction of an enlightened thought. The tools available today censor such approaches by restricting the number of signs, or by excommunication, the sacred or religious being reduced to the tool that unites the community. We need to reinvent the world, to regain a foothold in and through nature, with simplicity, without having to shout it, to say it, just to do it by sharing it with those who are here and now, in the here and now.

The Metaverse will perhaps, and hopefully, encourage the development of these places at the crossroads of the dark bar and the intellectuals’ lounge, provoke fights by interposed avatars, the after-effects will certainly be less risky. And from these places without taste nor flavour we will have to go out again, to find ourselves at dawn, or at sunset, in the half-light of the days to drink, discuss, elaborate, dream, love, etc. In short, to rediscover the Dionysian part of each of us. And we can also imagine that the sentimental relationship that binds each owner to his avatar/NFT that represents him would not tolerate that damages affect the representation: after-effects in the line of code, registration of the « hits received » in the blockchain, we can imagine everything, we are only at the beginning. When the human/machine relationship will have reached a neuronal cognition, we can think that the after-effects will also be physical. Once again, never forbid yourself to think, to think against yourself, to think the unreal in order to reach what allows you to rise above yourself.

About the Art of Chaos
Our era is characterized by the increasing isolation of the individual who tends to have contact with reality only through his television or computer screen. Under its political, social and cultural aspects, media coverage has become the best guarantee of our exploitation by the new world order, of which the Internet is the latest and most worrying instrument. In this collection of short texts, Hakim Bey shows how to shake it up by introducing this form of social chaos that is a real recovered conviviality. A debonair giant of Irish origin, Hakim Bey is one of the best-known representatives of American libertarian thought today, notably thanks to his theory of the TAZ (Temporary Autonomous Zone). www.decitre.fr

1° Peter Sloterdijk , The Competition of Good News
EAN13 / ISBN :9782842056414
What is the « good news » that Nietzsche is looking for – or that he finds? Around this question, Peter Sloterdijk returns to the way in which the gospel, or proclamation of the good news, can proceed today without resorting to deist worldviews.

2° Timothy Leary,
Techniques of Chaos: ISBN-10: 2844051138 / ISBN-13: 978-2844051134
Chaos and Cyberculture / ISBN-10: 2910718077
Chaos and Cyberculture reflects Timothy Leary’s belief that the twenty-first century will see the emergence of a new humanism, whose key ideas will be the challenge to authority, freedom of thought, and personal creativity, all of which will be supported and encouraged by the popularization of the computer and new communication technologies.