Since the birth of Zerobit & Onebit, in 1997, and their « odyssey » a few years later*, the spectrum of our planet has expanded into the cosmos. The grace of human genius, which pushes back the frontiers of its « being » whenever it is allowed to do so, has made this possible.
What is at stake for future generations, what we are committing today in our actions and projects, unfolds in different directions. The Metaverse, singularized by the technological necessity it has to exist, allows us to glimpse possibilities in confrontation, if not in radical oppositions between them, depending on the paths that will be taken. What takes shape there weaves an attachment more and more necessary to the tool which makes possible the projection of the being in this parallel universe so named. A projection which by the technical fact can also be summarized to a kind of extraction and capture [ by the technology ] of the essence of the user. At the same time, a network that could be described as neural draws the new surface of the globe several hundred kilometers above our heads.
The matter of the sphere which welcomes us takes an additional amplitude endowed this time with an « artificialized » Thermos composed by the satellite constellation* which becomes cover. It is the first step towards an exit of the world, of the terrestrial cave, to carry us to the threshold of our borders in a symbolic permanence until now. What previous generations carried within them, in 1961 (April 12) with the first orbital flight of Yuri Gagarin and eight years later with Neil Armstrong’s first step on the Moon, on July 20, 1969, has today become a commonplace. 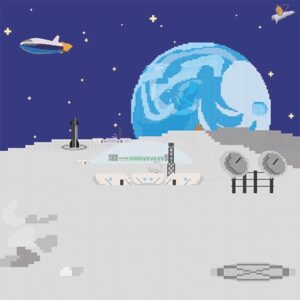 This human radiation, which extends beyond the Karman line, the limit between the Earth’s atmosphere and space according to the International Aeronautical Federation, is not insignificant. Our planet, whose average radius is 6,371 km for a surface area of approximately 510.1 million km2, would increase significantly by this extension of 340 km**. It would be then of 565,7 million km2***.
This projection of the living, by the grace of science, physics and technology is embodied in an exploratory dynamic. As Elon Musk has said many times, human beings will soon become a multi-planetary species. By extending the terrestrial domain to the frontiers of the thermosphere, he is laying down new steps to free the tools put at the service of humans from technical and material constraints by projecting them into a new space. It also establishes the possibilities of our extraction from gravity to approach the bases of deployment which will support an economy of means, of fuel, of energy in the exploration of our universe. We can only thank him for it.
This projection induces an emancipation of which we do not know yet the price. It is likely that sacrifices will have to be made, isn’t the new altar worth it? Since we crossed the threshold of the cave, whether it belonged to Plato or to Roy Lewis who still enchants entire generations with his work***, we can only measure the threshold reached. And, even if it evolves every day, we can estimate that it has rarely gone backwards – even in the darkest periods, pushed to the limits of nothingness, to the limit of falling into an irrevocable abyss, humanity has woken up.
In this conversation between the Metaverse, which explores and extracts the human mine to essentially trade it, and space exploration, which transports our humanity to an earthly afterlife, we will have to compose an ever-changing human race. That’s what the latest installment of the first Zerobit & Onebit odyssey tries to convey in this encounter with Elon M.
As you can see, this is a humble tribute to Elon Musk, whose genius propels us towards extra-ordinary horizons.
I am therefore happy and proud to announce the upcoming release of Meeting Elon….

To be completed in the near future